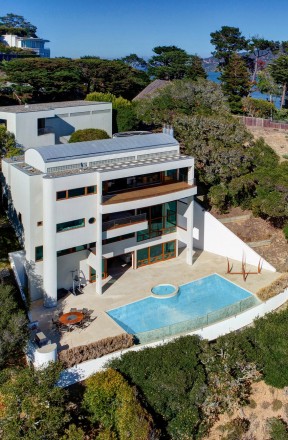 Featured in Architectural Digest, this world-class residence showcases panoramic views of the San Francisco Bay, the Golden Gate Bridge, the entire city skyline of San Francisco, and Sausalito. This magnificent masterpiece in a dramatic setting on the most prestigious location is comprised of a ±8,131 sq .ft. home on a ±0.67 acre lot, featuring 4 bedrooms and 5.5 baths. This architectural work of art was designed by architect Charles Gwathmey, with spectacular outlooks from every corner of the expansive 4-level floor plan. The primarily vertical organization of this house takes advantage of its sloped site on the southern coast of Belvedere Island. The uppermost level contains a 3-car garage with glass doors, an elevator which descends to a courtyard, a detached one bedroom, one bath guesthouse and a spacious wine cellar. The remaining levels of the main house are situated between two large retaining walls, which follow the natural contours of the site and splay outwards towards the Bay. The house’s compact organization within the precinct formed by the retaining walls ensures privacy. An interior circular stair winds around an elevator and forms the cylindrical focal point of the house’s massing. A barrel-vaulted ceiling articulates the living and dining room at the entry level of the main house, and a large deck projects towards the Bay to extend the space into the landscape. 3 bedrooms, 3 baths, a study and a two-story entertainment room occupy the intermediate floors, while a media room, a beautiful wet bar, a full bath with steam shower and sauna on the lowest level open onto a spacious outdoor terrace with a pool, whose “infinity edge” of water establishes a poetic connection to the Bay. The interior floors are limestone and wide plank, Bubinga wood and cabinets are lightly stained maple. The exterior is clad in gray stained cedar, with a curved standing seam zinc roof. All exterior windows, doors and decks are teak, all terraces are beige/gray flamed limestone pavers and the retaining walls are painted warm white stucco. 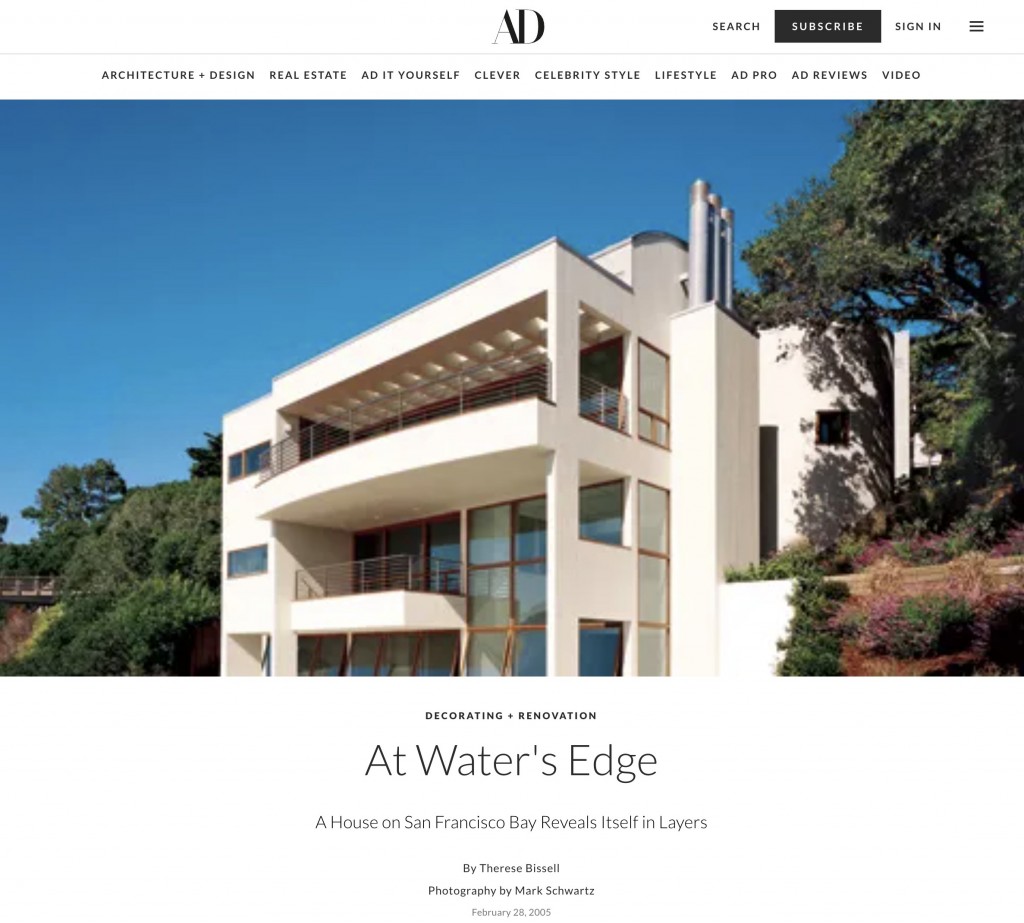 Accepting the commission to design a house on San Francisco Bay, Charles Gwathmey, whose residential projects occupy some of the world's most sublime real estate, knew he would be contending with a view unlike that of anything in his portfolio. A principal of New York–based Gwathmey Siegel Associates Architects, he was familiar enough with the area's celebrated physical charms, but it was the Golden Gate Bridge alone—with its transcendent presence and straightaway, connective relationship to his clients' property—that caused Gwathmey to rethink altogether the dialogue between his architecture and what lies just beyond it.

"There are certain iconic structures with a spiritual sense about them that force architects first to speculate and then, if they're given the chance, to respond," he says. "Having the bridge as the site focus, I realized I had to make the building a kaleidoscope for that amazing construction, and at the same time I had a responsibility not to be obvious about it. All the spaces exploit the view. But it's perceived sequentially and through multiple planes, as in a Japanese teahouse: You get it, you lose it, then you get it back again."

Layering the outlook (which spans the cityscape of San Francisco and the hills and marinas of Sausalito) was a design strategy determined by topography as well. The house sits on a cliffside in Belvedere, a verdant enclave that was once one of the bay's major islands and is now part of the Tiburon peninsula. Near Belvedere's southernmost point, the steep slope dictated that this would be Gwathmey's most vertical residence. "Typically, the progression for us is from the ground up, ascending instead of descending," he explains. "Here, you enter at the top, and the levels are essentially reversed—you keep going downward in a series of spatial variations, each with its own volumetric density and each about a different revelation of the view."

Gwathmey and associate partner Gerald Gendreau organized the four-level, steel-framed house after the Italian hillside model, which spills from the street into a courtyard and further drops down to tiers of living spaces. The street façade—essentially a cedar-siding-clad block with teak-and-frosted-glass garage doors—is a graphically rigorous triptych that gives away nothing of the building's scale or massing while suggesting the systematic grid of the interior. The recessed doorway at the north end marks the beginning of the circulatory procession, the expectation being that just through it is the house. Instead, one immediately arrives at a balcony looking over the zinc-covered, barrel-vaulted roof (the first "surprise," notes Gwathmey, and with its river-rock ballast in the foreground, the first "frame" for the water vista). A side stair then leads to the limestone-paved formal entrance court one level below.

There, a large cylinder abutting the front door encases an elevator "floating in the middle of a stair," as Gwathmey describes it, "an abstract articulation of form intersecting with volume." The rotunda is capped by a large skylight that contributes to the house's notable natural illumination.

Also servicing the openness of the one-and-a-half-height first level is the vaulted ceiling, which is edged by a glass-block clerestory and mediates both the scale and the acoustics (by incorporating fabric panels) of the living and dining areas.

The interior spaces throughout are defined by numerous instances of maple-veneered casework, almost as if the entire house—including the maple-framed glazing—were conceived as an intricate cabinet. Complementing the blond wood, the material palette (which, Gwathmey observes, "reflects the quality of the light as it reflects off the water") consists mostly of wide-plank bubinga floors, flamed beige-gray limestone floors (a wide swath marks the entrance area) and stainless-steel railings at the stair landings and balconies.

A signature of Gwathmey's architecture is his combining of insistent geometries with sensuous curves and textures. Eva Frank, director of interior design in the Gwathmey Siegel office, helped to strike that balance, creating "warm, understated, somewhat traditional furnishings for a very contemporary house," she says. "We used a neomodernist template; it's quiet and works well with the architecture." The clients, a professional couple, collaborated in the effort to preserve the architectural vision: Their sparing installation of modern artworks can be read as deference to Gwathmey's compositional intent.

In plan, the building is four planes: a horizontal stacking of solids and voids, which, as the architect points out, represents a new spatial dictate for him. "We'd never done this exact kind of layering before, but it's consistent with all our work: knitted and three-dimensional." Each tier is unique in its identity ("There's no feeling of going from equal floor to equal floor"); indeed, every level has a different sculptural profile. The double-height family room on the third level, for one, is modulated by the softly S-shaped balcony of the study overhead.

The exercise of descending through the house builds to an anticipation of the pool terrace. Gwathmey wasn't deterred in the knowledge that infinity-edge pools and resort-style terraces are not the norm for the blustery climate of San Francisco. He was determined, in the house's climactic moment, to engage the site with the bay in a way that virtually dissolves the standard inside/outside barrier.

Back in New York, at work on several well-sited projects, Gwathmey sustains his particular enchantment with the Golden Gate Bridge, recalling it in wistful terms. "In the change of weather it disappears in the fog and reappears—elusive and very mysterious and not always accessible," he says. As such, the famed construction may well have been the ideal inspiration for a house that reveals itself only by degrees. DISCLAIMER: The information set forth on this site is based upon information which we consider reliable, but because it has been supplied by third parties to our franchisees (who in turn supplied it to us) , we cannot represent that it is accurate or complete, and it should not be relied upon as such. The offerings are subject to errors, omissions, changes, including price, or withdrawal without notice. All dimensions are approximate and have not been verified by the selling party and cannot be verified by Decker Bullock Sotheby's International Realty. It is recommended that you hire a professional in the business of determining dimensions, such as an appraiser, architect or civil engineer, to determine such information. Sotheby's International Realty ® is a registered trademark licensed to Sotheby’s International Realty Affiliates LLC. Each Sotheby’s International Realty office is independently owned and operated.
The above information including square footage is based on data received from the seller and/or from public sources. This information is deemed reliable but has not been independently verified and cannot be guaranteed.